The Winds of Winter book by George RR Martin is not out yet and we have entered the year 2020. Fans are very angry with the author as it had been almost a decade and George has not finished the next book in ‘A Song of Ice and Fire’ series. Game of Thrones season 8 concluded the storyline for the TV audience despite having the worst ending but the book readers are still waiting for the future storyline.

I’ve just came to the realization that G.R.R.M. failed to produce The Winds of Winter in the last decade.

The Winds of Winter fans are getting impatient, going through an existential crisis and have started to doubt that GRRM will never finish the book. GRRM needs to understand that his loyal fans are not happy with him and should not further delay TWOW release date.

Fans are having Existential Crisis over TWOW Delay

Fans of the Game of Thrones book series have expressed their outrage over ‘The Winds of Winter’ release delay over various social media platforms. One fan on A Song of Ice and Fire Reddit page wrote that “Anyone else have a dark, seething existential crisis about wasted time towards a series with little to no probability of being finished?”

Meanwhile, other users in the comments discussed the possibility that the book series will never be completed by GRRM. The journey will come to an end and no other books will be completed, we will not learn about the fate of Jon, Dany or Arya. Many fans don’t have a long time to live and they are extremely sad that they will pass away with reading The Winds of Winter and wished George RR Martin finish it on time.

Will George RR Martin deliver his Promise of 2020 Launch?

George RR Martin promised on his blog that ‘The Winds of Winter’ book will be in his hands when he attends the WorldCon in New Zealand that will start from July 29, 2020. However, fans don’t have faith in the 71-year-old author and only 42% of them think he will meet the deadline, while the rest of 58% says he will miss it and TWOW will be delayed again.

To make the matter worse, Martin himself has said that he won’t be giving any new deadline for Winds of Winter release date, as he has a habit of breaking his promises. GRRM wants to start working on another Dunk and Egg novel once he is done with Winds of Winter and ‘A Dream of Spring’ books. 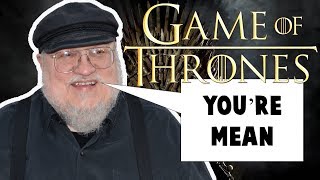