The Undertaker has been unstoppable. An absolute dominant force in the world of wrestling and entertainment, the deadman has been around for close to 30 years now and while we often speculate if he is going to retire anytime soon – there just seems to be no stopping for ‘Taker. Nevertheless, word in the rumor mill is, that taker is going to retire – and here are five reasons why time is up for taker!

For the past several years, The Undertaker has not had a proper storyline. With random matches being thrown together for him, it appears that retirement seems to be his last option now and there’s a good chance his retirement will be made into a WWE storyline.

The Undertaker has to be under some lifetime contract. Like why is he still wrestling. Let that man retire!!

He knows it, we know it, the WWE knows it. The deadman is no longer as good as he used to be. His recent match with Goldberg was among the worst matches of his career – and one would wonder how long can The Undertaker carry this on.

Retirement looms for the deadman as all other wrestlers of his generation have long hung their boots! Triple H remains the last semi-active name from a bygone era. Many who came after him have also retired.

Finally, The Undertaker retiring seems rather logical because he’s made enough money. He runs many successful real-estate businesses and doesn’t need to put his body on the line anymore. 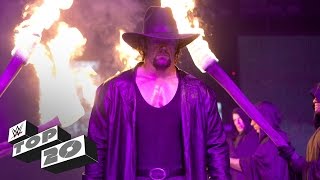