UFC 242 will be headlined by Khabib vs Poirier where Khabib Nurmagomedov, the UFC Lightweight Champion faces off against Dustin Poirier, the UFC Interim Lightweight Champion, and both men intend to win and unify the title to become the undisputed champ! However, while expectations are high from this match, there’s another co-main event alongside this one! Barboza vs Felder.

Some fans expect that Barboza facing Felder for the second time would be a better match than Khabib and Poirier. Let us take a closer look at this.

Does anyone else find it odd that Felder vs Barboza is the co main for the Khabib vs Poirier card, along with the lack of promotion of the card in general?

The fact of the matter is – Barboza and Felder are two men who know each other really well. They had a fight four years ago where Edson Barboza defeated Paul Felder. However, both the men were quite green back then. Four years later they’ve matured as fighters and have found their true rhythm! It will be interesting to see if Felder is able to defeat Barboza this time.

These two men are going to be the real show-stealers of the night. Barboza vs Felder is going to be all about a skillful set of moves and a combination of hard hits and technical submissions! It will be interesting to see how these old foes perform when they meet once again after four years!

Who yall got in Barboza vs Felder

The main event, however, has one thing working in its favor – high stakes. Not only is the UFC World Lightweight Championship at stake, but so is Khabib Nurmagomedov’s undefeated streak. He enters Khabib vs Poirier at 27-0, which is the longest undefeated streaks in MMA history. Will Dustin Poirier be the first one to conquer Khabib? We’ll find out at Khabib vs Poirier at UFC 242. 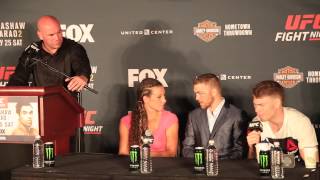