Tyson Fury vs Deontay Wilder was quite a controversial match in terms of the final result. Both the men were undefeated until then and had a perfect record. While both of them walked out undefeated, there was one draw that got added to their tally. Most fans considered this match should have determined a winner – and now we’re in the midst of rematch talks!

However, to the utter shock of many boxing fans, this much awaited fight between Fury vs Wilder might just get cancelled because Tyson Fury is showing an active interest in WWE!

Fury vs Wilder was top 3 boxing matches I’ve seen in my life..

Fury vs Wilder II is a fight which is likely to take place on February 2020. However, given his recent appearance at WWE SmackDown on Fox, it appears that Tyson Fury, who seems to be at the fag end of his boxing career, is looking for work outside of mainstream boxing.

If Fury vs Braun Strowman takes place sometime at WrestleMania 36, this would mean it takes place only two months removed from the biggest fight of his career – Tyson Fury vs Deontay Wilder II. This seems unlikely now as Fury will be appearing on Raw as well and is likely to continue making WWE appearances – is he taking the Mike Tyson path?

A WrestleMania angle raises a lot of questions as Mania takes place just two months after Fury vs Wilder 2.
But it doesn't have to be a match, could be something like Chris Jericho and Mickey Rourke in 2009.
Fact that Fury is coming to RAW teases that kind of direction #SDLive

For now, his first fight is with Braun Strowman. However, given his popularity and his real fight feel, Fox might be more than interested in signing him up for a regular deal at SmackDown! It will be interesting to see if Tyson Fury vs Deontay Wilder gets cancelled because of Fury’s interest in WWE. 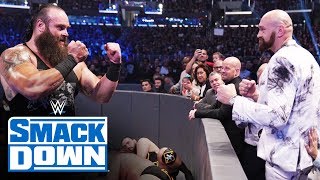