Donald Trump has been finally been impeached and the final decision lies in the hands of the US Senate. While the House of Representatives voted in favor of removing Trump from the post of US President, the case is now in the court of US senate and the trial will start very soon. But the democrats and other candidates for the next presidential election campaign are celebrating as if Trump is already fired.

If you thought the democrats had a meltdown after Trump’s win in 2016,

wait until @realDonaldTrump is impeached, acquitted in the Senate, & re-elected in 2020. #ImpeachmentDay #TrumpImpeachment

There have been only two cases in the history of the United States that the impeachment process reached till the US Senate house and in both of them, they had not enough votes to remove the president from the White House office. Trump has nothing to fear, the whole trial is kind of a joke and even the impeached president can easily win in the 2020 election term.

Donald Trump is Impeached, Not Convicted

People who have no idea how US president impeachment process works are celebrating it and saying that Trump has been finally impeached. While the whole Trump Impeachment thing is hyped up, nothing big is about to happen and it is all just a sham. The Senate trial is largely dependent on the Republicans who have already pledged their support for President Donald Trump.

There are only 47 Democrats and Independent in the US Senate house and they will need 67 votes to prove the majority for removing Trump from the office. There is no way that 20 Republicans will join the Democrats and vote against Trump. The whole Trump Impeachment scene is created for the 2020 Presidential election, so US citizens don’t vote for Donald Trump in the upcoming elections.

Donald Trump won’t be impeached because the public supports him, even if it doesn’t seem so. While the Democrats are divided on removing Trump and 47 percent of them don’t want Trump to be impeached. The fact that half of the Trump haters are divided on the impeachment process gives a strong hint on what is about to happen next in the trial.

As for the Republicans, 9 out of 10 are strictly against the decision and they would gladly vote for Donald Trump as their president in the 2020 elections. It may appear that everyone in the US hates Trump, but that is not true and his supporters are in enough numbers to re-elect him as the next US President. 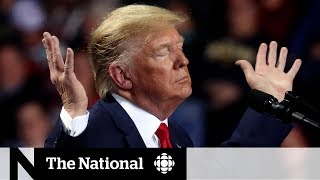