When is the new series of Top Gear back on TV?

Top Gear is all set to start its Season 26 series on 17th February 2019 at 8 pm. Tune into BBC2 to watch the show which will feature five episodes, each for an hour.

Here’s your first look at Top Gear series 26! @Matt_LeBlanc, @harrismonkey and @MrRoryReid will return to your screens soon. Here's a teaser pic.twitter.com/cYJmG1TOBk

Who will be the presenters in the new Season?

Friends star, Matt LeBlanc, Chris Harris and Rory Reid will obviously feature in the series. Sabine Schmitz will be tagging along too. And of course, the anonymous white suit Stig will be there for the hot favorite segment of the show, Reasonably Fast Car.

Which celebrities will be in Top Gear Season 26?

Top Gear’s previous seasons have featured stars like Vicky McClure, David Tennant, and Benedict Cumberbatch. Top Gear Season 26 hasn’t confirmed any names for now, but we can expect to have a few more biggies this time too. 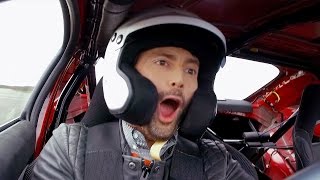 Where has the Top Gear latest series been filmed?

Top Gear Season 26 has been filmed in parts of Sri Lanka, Norway and Spain. Once again, the trio will explore the best substitutes for supercars, races amidst the mountains in small cars and trying Tuk Tuks.

Is this Matt LeBlanc’s last series?

Matt LeBlanc gave a statement that the “required commitment and a considerable amount of travel takes him away from his family and friends. And he is not quite comfortable with that.” Hence, confirming his departure from Top Gear.

Andrew Flintoff and Paddy McGuiness are going to replace LeBlanc. Also, Rody Reid will discontinue his role as the presenter of Top Gear and heading off to BBC3 show, Extra Gear.