The Winds of Winter has not released yet despite there is so much fan demands for the book. George RR Martin is writing the sixth book in “A Song of Ice and Fire” series for years and it is still not finished. The 71-year-old author has already broken two promises to publish “The Winds of Winter” in the past eight years and his next promise is not even valid now.

I wonder in which year George R.R. Martin will finish his book Winds of Winter. The last time he published a book in the A Song of Ice and Fire series was 2011.

Fans are wondering what could be the reason behind TWOW delay as Martin fails to deliver the book on time. However, GRRM has recently given hints on Winds of Winter progress and the difference between book ending and Game of Thrones show.

George RR Martin admits that he is very late to publish The Winds of Winter and he is still writing the book. The author recently revealed that even he is frustrated because TWOW could have been out by now if he had finished writing on time.

[blockquote footer=”George RR Martin “]I know there are a lot of people out there who are very angry with me that Winds of Winter isn’t finished and I’m mad about that myself. I wished I finished it four years ago. I wished it was finished now. But it’s not.[/blockquote]

The author even blames the “writer’s block” as the main reason for the delay in Winds of Winter release date. However, fans believe that his involvement in HBO’s Game of Thrones and other spin-offs is the main reason why TWOW is still not finished. Further, George RR Martin is a popular name so he is invited to a lot of conventions, which keeps him from writing “The Winds of Winter” a bit more.

George RR Martin is currently writing “The Winds of Winter” at a rapid pace as he is under self-isolation due to the COVID-19 pandemic. The author was supposed to bring a manuscript for TWOW at the Worldcon 2020 event in New Zealand this July, but it will be a virtual event due to the Coronavirus outbreak and hence the promise is nullified. However, George recently said in an interview that he is old and if something happens to him, no one would know how ASOIAF would end. 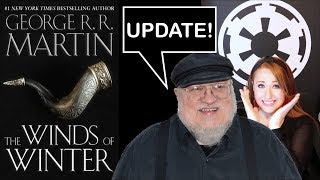