The Sims 5 could be announced at the 20th-anniversary event on the life simulation video game. Fans have been waiting for so many years for any kind of updates by EA and Maxis on the next Sims game in the series. It is expected that ‘The Sims 5’ game would be announced at the 2020 event and it will be revealed that the title will have a 2020 launch date. Here are more details on ‘The Sims 5’ release date, gameplay and the possible launch date announcement of the game.

Expected in the Sims 5 reality… pic.twitter.com/chCFZ76P3F

The Sims 5 game has been in pipeline for the last six years as ‘The Sims 4’ was released way back in 2014. Everyone is expecting EA-Maxis to announce the next game in the franchise very soon as the waiting period has extended beyond their patience. EA has been quite mum about ‘The Sims 5’ release status but fans are hoping that it would be their biggest reveal of 2020.

There are reports are suggesting EA will announce the next Sims game at the 20th anniversary event of the title. It is also claimed that the official release date of ‘The Sims 5’ will be revealed as 2021 and the first look of the game will also be unveiled. But it all depends on how much content for TS4 is still left to roll out by the developers as TS5 will only come out once the expansion packs of the current title are completed.

The Sims 5 Gameplay and Features

The Sims 5 rumors are once again in the news after EA CEO Andrew Wilson hinted on the future of gaming franchise. Wilson during EA’s Q3 2020 earnings calls on January 30 talked about ‘The Sims’ for a new generation of gamers and what other things they have planned for the franchise. The Sims 5 could be online, have massive multiplayer options, connected with social media along with cloud gaming support and PS5, Xbox Series X compatibility. 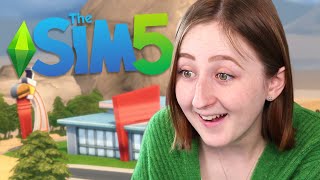