The Sims 5 game is finally in works and it will bring a lot of cool new features and updates as per EA CEO Andrew Wilson. Fans of the life simulation game have been waiting for years for the fifth installment of ‘The Sims’ franchise and it is now very closer to launch.

"The Sims 5 will be online" pic.twitter.com/DYRZHPDJF1

It is not just limited to that, as the EA boss has hinted that ‘The Sims 5’ will support cloud gaming platforms, upcoming consoles such as Sony PS5 and Xbox Series X, along with social media interactions for The Sims Online gameplay. Here are more details on the new updates and features of The Sims 5 along with speculations on the title’s release date.

Electronic Arts CEO Andrew Wilson revealed that they are planning to make the next Sims game for future generation gamers and it will support cross platforms and use of cloud gaming. It also means that ‘The Sims 5’ is being developed keeping in mind about the next-gen gaming consoles such as PlayStation 5 and Xbox Series X which are set to release at the end of this year.

Apart from cloud gaming support and cross-platforms, Wilson also hinted that ‘The Sims 5’ will take social media interactions to a whole new level. The Sims Online game has already kind of doing that and now it will be a whole new experience will full-on MMO type features.

The Sims 5 users can expect to have their own Sims avatar for their social media handles which they could share in their feed doing different activities. In short, the plan is to bridge the gap between real-life and game simulation for ‘The Sims 5’ and make sure your avatars live with you like your social media friends.

The Sims 5 release date is something Wilson doesn’t share with the audiences, but it will take some time if they are implementing so many changes to the game title. While the EA CEO nowhere said that the features will be in ‘The Sims 5,’ but it makes sense as they won’t develop so many things for an older game. Players all over the world are eagerly waiting for EA to announce ‘The Sims 5’ and it could happen in EA Play 2020 as per some reports. 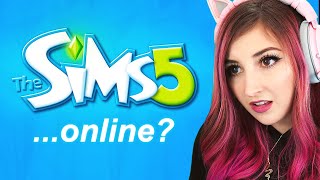