The Falcon and the Winter Solder Disney+ TV show is currently filming at various locations and from the leaked set pics, it seems they are doing something big. Wyatt Russell has recently been seen wearing a Captain America costume and he will be appointed by the US government in the absence of Steve Rogers.

But that’s not the big leak, it seems Falcon and Winter Soldier series will introduce the MCU version of Thunderbolts villains and they could soon have their own Disney plus TV show or even an MCU movie. Baron Zemo, Ghost, Justin Hammer, Red Hulk, Crossbones, Taskmaster, etc. characters are rumored to be the part of Thunderbolts group who would create a lot of trouble for Sam and Bucky in TFATWS show.

MCU Version of Thunderbolts in TFATWS

The Thunderbolts have been formed by different villains over time but Baron Zemo has been one of the most consistent names who is also the leader of this evil group. It is why Kevin Fiege decided to get Zemo back from Captain America: Civil War and add other antagonists to form the MCU heroes gallery of rogues.

Secretary Thaddeus E. “Thunderbolt” Ross could be the one from the government side who forms the group to fight the Avengers. It is a known fact that Secretary Ross hates the Avengers and uses everything in his power to stop them, and after the events of Infinity War and Endgame, he could himself become Red Hulk and lead the Thunderbolts group against the remaining Avengers.

The Thunderbolts Movie or Disney Plus TV Show

Marvel fans have complained several times that most of the movies are just wasting their evil bad guys and they are never seen again. The list includes Abomination, Justin Hammer, Ghost, Baron Zemo, and many other names who were not shown dead.

There have been several rumors that Marvel is planning a Thunderbolts movie or something like Siege on Asgard with Norman Osborn leading the group. While the Thunderbolts could have different names from comics, a movie could actually work after the power vacuum created from the Snap in Avengers movies. It could also work as a Disney+ TV series as the streaming services is greenlighting a lot of shows. 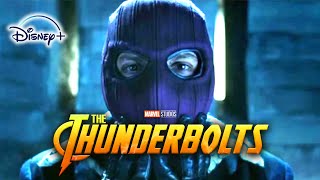