The Expanse Season 5 has been renewed by Amazon after the massive success of the fourth season. The space-exploring TV show was canceled by SyFy after three seasons and Jeff Bezos decided to save it as he was interested in the story. The Expanse is now aired as Amazon Originals and season 4 just premiered last month and received amazing reviews from both critics and fans.

Amazon Prime Video has confirmed that the fifth season of ‘The Expanse’ is under works and it is going to be bigger and better than the fourth season. Here is everything you need to know about Amazon’s ‘The Expanse Season 5’ trailer, release date, cast and plot spoilers.

The Expanse Season 5 production started in October 2019 and it is going on at full pace at the moment. Based on the time taken by previous seasons to come out, season 5 of the show will at least take around a year to release. But Amazon has increased the budget of the show and it has improved the production quality and special effects, it could take longer.

The Expanse Season 5 could premiere in December 2020 or it could even take early 2021 for the show to air on Amazon Prime Video. As for The Expanse season 5 trailer, the makers could surely release some footage during Comic-Con 2020.

The Expanse Season 5 has promoted 3 of the cast members from the previous season as series regulars including Keon Alexander as Marco, Nadine Nicole as Melba and Jasai Chase Owens Felip. The main cast members of the show will also be returning for the fifth season and it includes the following names.

Dominique Tipper as Naomi Nagata from "The Expanse".

The Expanse Season 5 plot will follow the story of the fourth Expanse novel, Cibola Burn bringing the next installment Nemesis Games to life. It will follow the plotlines about the inter-planetary land rush, the collapse of the old power structures and the Expanse crew trying to go home amid the rise of new world order. 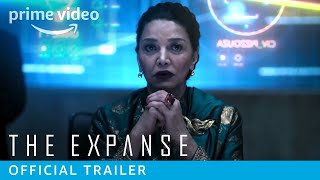