Tesla Model 3 cars are releasing earlier in China and that too with a reduced price. The locally manufactured Tesla cars will start 2020 in China with a band as the previously ordered electric sedans will be delivered by the first week of January. Elon Musk has reduced the price of Tesla Model 3 following the Chinese subsidies on electric vehicles and here are the reduced prices and delivery dates for new orders.

Tesla Model 3 is available to order via Tesla’s official website and the Chinese customers can also note the price change for the electric vehicles. The price for a standard variant of Model 3 Tesla electric sedan has been reduced from 323,800 yuan ($46,440) to 299,050 yuan ($42,890). Also, the prices for higher-end models have been reduced and customers can choose from a bigger battery capacity for 439,900 yuan or the performance range for 509,900 yuan.

The decision to cut the price of Tesla cars have been taken after the government has allocated subsidies on electric vehicle purchases. The incentive is being given by the Chinese government for ditching gasoline-dependent cars and choosing electric vehicles such as Tesla Model 3. Apart from China, several other countries in Asia such as Japan and India are giving their own version of subsidies on the purchase of electric plug-in vehicles.

Tesla Shanghai factory is now fully operational and it has made the delivery of their cars earlier than the given schedule. Elon Musk is confident in his company and promises that the Shanghai Gigafactory can produce 1,000 vehicles per week.

First look at your China-Made Tesla Model 3 from Shanghai Gigafactory at the Delivery Ceremony.

First 15 cars to be delivered to employees. pic.twitter.com/BBXf7QEk4S

The previously ordered Tesla Model 3 are set to be delivered from Tuesday, January 7 and the new orders for the electric sedan will be delivered by the first quarter of the year 2020 (Q1’2020) based on vehicle configurations. 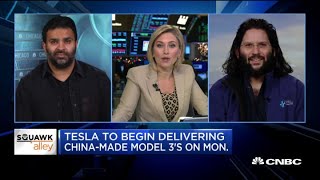