Tesla cybertruck 2 might soon be a reality even before the first model comes out on road. It is how basic things work in any manufacturing industry, where models are created years before the release date. Even though there are some cybertruck running on the roads, Tesla will only deliver it to normal customers in 2022.

Elon Musk recently told that there are no more projects in development and yet two new heavy-duty electric vehicles from Tesla were seen. There is a secret master plan for Tesla and as per the schematics, Tesla is already prepping for Cyber Truck 2 as hinted by Elon Musk himself.

As per the Electrek reports, Tesla is developing two types of electric vehicles in addition to consumer vehicles. It will be heavy-duty trucks and high passenger-density for urban transport and they are in the early stages of development and would be unveiled by the next year. One of them could be the Tesla semi and the second one is rumored to be Cybertruck 2.

While the first variant of cybertruck is essentially a car, the second model will be ac actual sized truck called Cyber Truck 2. Elon Musk’s Boring company has created special tunnels Las Vegas Convention Center for the passage of Cyber Truck 2.

Tesla has a secret master plan and Elon Musk is the main visionary behind it, and the documents on the Tesla website gives more information about it. Tesla Model S, Model 3, Model Y, solar panels, Roadster, Cybertruck, Tesla Semi are all part of the bigger plan and Tesla cybertruck 2 could be next in the series. While it is called Tesla Transport vehicle in the production, the official name could be anything but most rumors hint towards cyber truck 2. 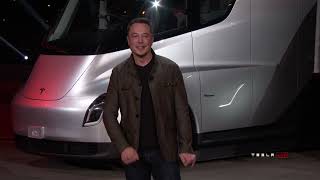