Kobe Bryant will be honored at the Super Bowl 2020 game as even the NFL officials and players are mourning the loss of the deceased NBA legend. The entire sports community is paying homage to Kobe and giving him special tribute in whatever ways they can.

During the pre-Super Bowl press conference on Wednesday, NFL commissioner Roger Goodell himself informed the media that Kobe Bryant will be honored at the Sunday’ Super Bowl championship game in Miami. Super Bowl 54 will provide a special tribute and honor Kobe Bryant for his immense contribution to various sports throughout his life.

[blockquote footer=”NFL Commissioner Roger Goodell”]Kobe was a special person and it’s a hard process to understand what has happened. It won’t be just Los Angeles who will be mourning the passing away of Kobe Bryant, we the people at NFL are also deeply saddened over his tragic loss. We will think of Kobe and his family along with everyone who was a passenger on that helicopter.[/blockquote]

There was a moment of silence even at the Pro Bowl game where Kobe’s picture was put up on the big screen and fans responded emotionally to the scene. Goodell also said that NFL has lost Chris Doleman this year and both he and Kobe will be celebrated in some form during Sunday’s Super Bowl game.

Kobe Bryant’s close friend and former Lakers teammate Shaquille O’Neal will also be honoring him during the Super Bowl weekend. O’Neal has announced that he won’t be canceling his ‘Shaq’s Funhouse Super Bowl Party’ and use it to celebrate Kobe as he would have wished.

Shaq announces he is donating all proceeds from his Super Bowl event to the families affected by the helicopter crash and the Kobe and Vanessa Bryant Foundation. pic.twitter.com/PP9dL5Cbld

The donations from the party will be provided to Kobe and Vanessa Bryant foundation, and will also help the other seven families whose dear ones passed away in the accident. Everyone will be paying their homage to Kobe Bryant and others who lost their lives in the tragic accident. 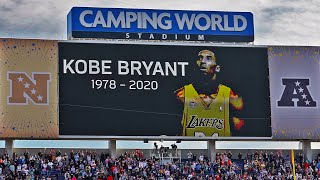