Sony Mobile is coming with a new Xperia series smartphone very soon and it could be named as Xperia 5 Plus and will be released in the next month. Based on the leaked reports, Xperia 5 Plus will have a rectangular design similar to the previous models and hence bezel will be smaller and it can accommodate a bigger display.

There are rumors that the upcoming Sony Xperia 5 Plus will have a four-lens rear camera with ToF support at the back and it will also include the headphones jack. Here are more details about the Sony Xperia 5 Plus specs, features, and release date.

Sony Xperia 5 Plus leaks suggest that it will have a very slim bezel on the top of its 6.6-inch OLED screen display. There are also rumors that the bezel will house two front-facing selfie cameras. While the backside of the new phone will look similar to the regular Xperia 5, there will be a large Sony logo in the middle and the camera assembly will be stacked in a vertical position on the top left portion.

Sony Xperia 5 Plus camera setup indicates four camera lenses: a primary camera, a telephoto lens, an ultra-wide-angle lens as well as a time-of-flight (ToF) lens, which is used to capture 3D depth images. The Xperia 5 Plus is said to have a fingerprint scanner at the side, with no ultrasonic readers or facial scanners.

As for the hardware capacity, the next Xperia phone will have 12GB of RAM and will be powered with Snapdragon 865 processor. There are also reports that Sony Xperia 5 Plus will have a headphone jack, as the port option is very rare for the current smartphones.

Sony Xperia 5 Plus release date could be at the Mobile World of Congress (MWC) press conference 2020. The upcoming smartphone could be the main product launch at the MWC event in Barcelona on February 24, 2020. Sony usually launches its new products at this event only and it will be perfect for Xperia 5 Plus release. 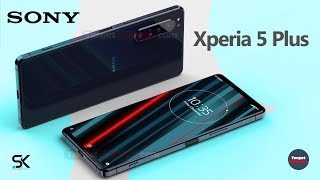