Philip Rivers is leaving the Los Angeles Chargers after 14 years and the quarterback has heated up a lot of NFL trade rumors. He will be entering the free agency this year and there will be lots of offers from clubs who want a new QB for NFL 2020 season.

“In anything you do, it’s the people you do it with that make it special. There are so many relationships and memories with coaches, support staff and teammates that will last forever, and for that I am so thankful."

Philip Rivers and the Chargers are splitting after 16 years.

Philip Rivers might be 38 years old but he completed 4,615 passing yards with a 66% completion rate in the latest NFL season and Tom Brady has won a Super Bowl at 41 and hence age is never an issue. Indianapolis Colts, Tennessee Titans, and Tampa Bay Buccaneers are the top three teams rumored to make a trade deal with Philip Rivers in the upcoming NFL 2020 free agency.

Indianapolis Colts is the most ideal trade destination for Philip Rivers as the team needs an upgrade at the quarterback position after Andrew Luck retired before the start for NFL 2019 season and Jacoby Brissett did a poor replacement job. Further, Colts head coach Frank Reich and offensive coordinator Nick Sirianni have both supervised Rivers when LA Chargers used to play in San Diego and have a very good bonding with each other. Philip Rivers is obviously a much better upgrade over Brisset and the Colts will make sure to sign him by offering a new contract.

Tennessee Titans have a much better offensive lineup that could easily help Philip Rivers and increase his numbers. Also, Rivers lives in Alabama which is just a few hours away from Tennessee and the quarterback can stay at his home easily. But the only problem is that Titans won’t replace Ryan Tannehill that easily and may even use the franchise tag to retain him. If they fail to keep Tannehill in their roster, then Rivers is the next best option for the team.

Tampa Bay Buccaneers are in the same boat as the Titans as they will try their best to retain Jamies Winston and Philip Rivers might be the replacement quarterback in case things don’t work out as planned. It is also reported that Bucs had a previous interest in Rivers when he moved with his family to Florida and also their head coach Bruce Arians is a big fan of the quarterback. 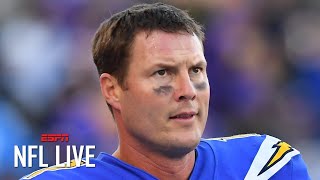