Parents were pretty embarrassed when a fun trip to the zoo ended with children learning about birds and bees from a pair of gorillas.

Going to the zoo can be educational for both kids and adults because we get to see animals up close that we don’t normally see.

But one thing that should never be forgotten is that animals don’t hold themselves to the same standards as humans do, so they can’t be blamed if they do what they want.

For instance, two people probably wouldn’t get dirty in public (unless they don’t mind getting arrested), but two gorillas in a zoo don’t mind doing it in front of a crowd.

This is exactly what happened to a group of families who were enjoying a day out when a male gorilla did a squat so deep that gymnasts would have a hard time holding it.

It’s not clear how they asked each other out, but the video shows that they don’t talk much or play around before getting down to business.

People were torn between giving the apes space while they were mating or watching nature happen in front of them. 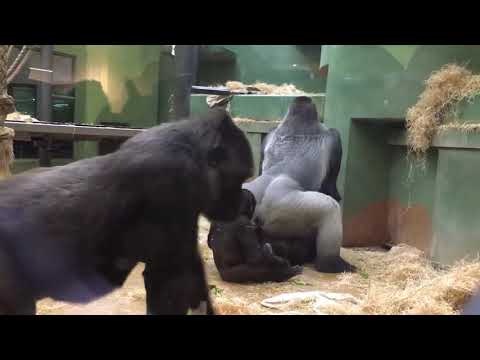 A mother can be heard telling her child at one point:

I don’t know if you know, but this is how babies are made.

It took quick thinking to turn the sexual display into a way to learn.

Read more:  The Big Bang Theory season 12: How Penny and Leonard changed everything in the end

The video gets even stranger when a young gorilla, who doesn’t seem to be scared by anything, comes over to see what’s going on.

The young gorilla got right up close to the big gorilla and looked right into its rear end to get a view that even binoculars couldn’t give him.

But putting a hand on the gyrating bottom of the male gorilla was either a very rude thing to do or a great way to show support for the family, which might be about to grow.

The whole thing only lasted a few minutes, and neither person hugged the other when they left as if nothing had happened.

Nature is really beautiful, isn’t it?