One Piece Chapter 978 will pay off the things and characters that have been build up for so long. Luffy and his alliance are ready to attack Kaido and his crew and the whole gang is back together again. Kaido has a son and his secret identity be revealed in One Piece 978 manga chapter. Kanjuro was able to kidnap Momonosuke after he was revealed as the traitor and Oden’s son is now in the hands of Orochi.

The Scabbards and Luffy will have to find a way to save Momo in “One Piece” chapter 978 if they a battle without any distraction. Several theories are floating around regarding Kaido’s son and he could be an important character in the upcoming manga issues. Here are more details on One Piece Chapter 978 new release date, spoilers, predictions, theories, raw scans leaks and how to read online the manga chapters.

One Piece Chapter 978 will finally reveal the identity of Kaido’s son and fans are wondering whether it will be a totally new character or someone we already know. Kaido announced about his son at the party where he was drinking at the banquet table. It has lead to a popular “One Piece” chapter 978 theory that Kaido’s son could be a weak person and nothing like his father, parallel to Oden and Momonosuke.

Kaido’s son and Oden’s son Momo will most probably come face to face and relate with each other. It is why several fans are predicting that Kaido’s son will help Momo escape from Orochi and save the Kozuki heir as both of them are always compared to their fathers. One Piece 978 theories are also predicting that Kaido’s son could be the faceless character who instructed Jack to fetch Caesar before. It means he could be a strong character that will have a huge impact in the Wano war, creating troubles for Luffy and his allies.

One Piece Chapter 978 new release date is Sunday, April 26, 2020 as the manga is delayed due to one of the Shonen Jump employees being tested positive for Coronavirus. However, the raw scans for the manga will be leaked online 2-3 days prior on the internet around April 24 and fans will start discussing the spoilers of One Piece 978 over Reddit and other social media platforms. 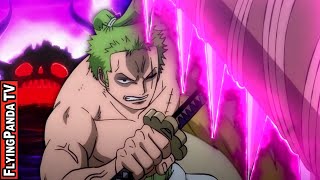