One Piece Chapter 978 will come out after two weeks and the wait is making fans desperate for any kind of spoilers or leaks. Luffy and his alliance have launched their raid on Onigashima to attack the Beast Pirates led by Kaido, but the battle won’t be easy.

There are many One Piece 978 spoilers and theories claiming that the identity of Kaido’s son will be revealed in the next manga chapter. Here are some of the best “One Piece” chapter 978 theories and predictions that give important spoilers about the devil fruit powers of Kaido’s son.

One Piece Chapter 978 Theories and Spoilers

The YouTube channel Flying Panda has a fan theory which claims that One Piece Chapter 978 won’t be the first time viewers will be seeing Kaido’s son. The unknown son of the Beast Pirates captain has previously been seen with Jack the Drought when he was returning to Zou.

The theory says that when Jack had an encounter with one of the ancient Elephants, ships with scorpion head were seen near Zou. It could be Jack’s reinforcements which were headed by Kaido’s son. One Piece 978 theory says that Kaido’s son could be a scorpion devil fruit user and will play an important role in the upcoming battle.

One Piece Chapter 978 new release date is Sunday, April 26, 2020 as the manga is on hiatus for this week due to Coronavirus outbreak in Japan. However, the raw scans for the manga will be leaked online 2-3 days prior on the internet around April 24 and fans will start discussing the spoilers of One Piece 978 over Reddit and other social media platforms. 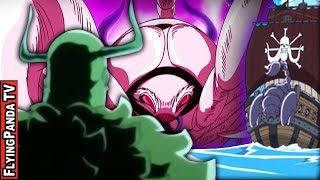