One Piece Chapter 978 raw scans are leaked on the internet and with a lot of spoilers about the manga are out. Kaido has gathered the Beast Pirates and called in more reinforcement, hinting that he takes Luffy and the Straw Hats more seriously. The Flying Six are introduced in One Piece 978 manga chapter and Big Mom also joins Kaido’s party. Jinbei and Macro have joined Luffy’s alliance which makes the upcoming battle equal and Law is planning to use Luffy and Kid as decoys.

Fans will also get to see more on Kaido’s son in “One Piece” chapter 978 but his true identity might still not been revealed for a few chapters. There was no manga issue released last week as One Piece has been delayed due to the COVID-19 pandemic. Here are more details on One Piece Chapter 978 new release date, spoilers, predictions, theories, raw scans leaks and how to read online the manga chapters.

One Piece Chapter 978 Spoilers and Leaks

One Piece Chapter 978 leaks show that the Flying Six (Tobi Roppō) arrives at Kaido’s party. There are twp very beautiful women with the Flying Six team and the character names apart from X Drake and Page One are inspired from British, Hungarian and Japanese card games.

One Piece 978 spoilers don’t indicate the rewards of Flying Six members hinting there might be some future relevance to it. One of the Flying Six members is wearing a mask but their identity is kept hidden. Ulti is a very fearless character in “One Piece” chapter 978 as insults Kaido and calls him a stupid on his face.

One Piece Chapter 978 new release date is Sunday, April 26, 2020 as the manga is delayed due to one of the Shonen Jump employees being tested positive for Coronavirus. However, the raw scans for the manga are already leaked on the internet and fans have started discussing the spoilers of One Piece 978 over Reddit and other social media platforms. 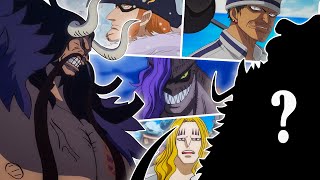