One Piece Chapter 973 will resume the storyline in the present timeline as the adventures of Luffy and the Straw Hat Pirates continues. The next manga installment will carry the story 20 years into the future after Toki said, ‘Look ahead Oden, 20 years in the future.’ It will also explain how Toki was able to send Momonosuke forward in time and what happened to her after all these years.

One Piece 973 release will bring back the story back to the present day where the rebels and the Scabbards will try to attack Orochi, but things won’t go as planned and they might get captured. Here are more details on One Piece Chapter 973 release date, spoilers, predictions, raw scans leaks and how to read online the manga chapters.

One Piece 973 chapter story will show the aftermath of Port Tokage getting destroyed and the boats blasted to pieces by bombing. The Nine Red Scabbards won’t have many options and will attack Orochi without any preparation or planning. Kinemon and others won’t be able to kill Orochi as he has gathered enough power in the last years and increased his security detail.

The assassination attempt on Orochi in One Piece 973 will most likely a failure where Kinemon and the rest of the Scabbards will get captured. The Strawhats and rebels will be forced to take the longer route to the rendezvous point where Orochi might have set up certain traps and inflict maximum damage on his enemies. One Piece Chapter 973 might also reveal about the traitor from Kozuki clan who shared plans with enemies along with some updates on the fate of Toki.

One Piece Chapter 973 will release in manga stores on Sunday, March 1, 2020. However, the raw scans for the manga will leak online 2-3 days before and fans will start discussing the spoilers of One Piece 973 over Reddit and other social media platforms around February 28. 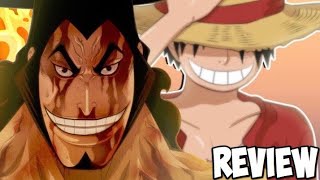