The Pittsburgh Steelers are having a crazy year and NFL 2019 season had made it crazier. Earlier, Le’Veon Bell and Antonio Brown left the Steelers team due to different issues and now they are 1-4 in the current NFL season. Ben Roethlisberger is already out for the entire tournament due to an elbow injury and now his replacement Mason Rudolph has also gotten injured badly in the Week 5 game against the Ravens.

The Steelers need a new quarterback and one name that was popping up even when Big Ben was injured is Colin Kaepernick. The free agent is looking for a job and has contacted every team and it looks like the Steelers can replace Rudolph with Kaepernick.

Colin Kaepernick has made it clear that he wants to return to the NFL and has been working hard for it. Despite no team taking the risk due to the other factors involved, the Steelers don’t have many options left.

Steelers really needed that W to revive season. If there was ever team to break rank & sign Colin Kaepernick, it’s Steelers. The Rooney family are likely the only non-Trumper owners in NFL, and have strong history of signing Black QBs (often back-ups which is rare).

The opening quarterback is just 31 years old and has uploaded his working out videos with Odell Beckham Jr. which proves that he is in shape and ready for playing in NFL once again. The situation is tense and the Steelers might offer Kaepernick a deal rather than losing the rest of the games badly.

The Steelers needs a Quarterback Badly

Devlin Hodges replaced Rudolph for the few minutes of the Steelers vs Ravens game he only went 7-9 for 68 yards and rushed twice for 20 yards. It is not enough and the Steelers need someone solid for the rest of the 11 NFL 2019 season games left if they want to make a comeback.

The Steelers have to make choice as they are missing out on both Ben Roethlisberger and Mason Rudolph. Colin Kaepernick has experience playing in the big games and he should be the ideal replacement and not some undrafted free agent. 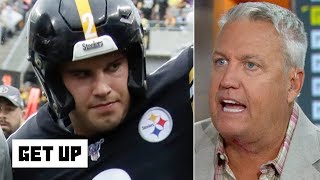