The Patriots might be a great team but the competition in the NFL has increased so much that they need to improve their game. After the release of Antonio Brown, the New England Patriots team need a good wide receiver and Stefon Diggs from the Vikings could be the answer.

The #Vikings listed WR Stefon Diggs as having missed practice today for non-injury reasons. No other explanation yet available.

The WR from Minnesota Vikings missed his Sunday Week 4 game against the Chicago Bears and it seems he has no plans to join them. There have been reports that Diggs is eyeing to get a trade deal from the Patriots and giving out hints for his exit from the Vikings. Stefon Diggs has started following the Patriots on Instagram and they could soon sign him to replace Antonio Brown’s position.

Stefon Diggs is now following most of the New England Patriots player on Instagram and it means that he is trying to convey his message to the team. Apart from that, Diggs is also posting cryptic messages and stories where he is hinting that the Vikings can’t control him anymore.

It is not just Diggs, a lot of other players from Minnesota Vikings are not happy with how their team has been performing lately. Adam Thielen, another wide receiver from the Vikings also expressed his frustration that despite his best efforts, the team support is totally useless.

Tom Brady needs a WR after release of Antonio Brown

Antonio Brown may have a lot of issues but he was always at his peak on the field. Even in the single game, he played for the Patriots, Brown did an amazing job and proved to be a great weapon to Tom Brady. Now with his exit, the Patriots have become somewhat weaker which was apparent in their last game against the Jets.

Waiting for that “Stefon Diggs to the Patriots” sleeper notification pic.twitter.com/UI9RWpVszi

Stefon Diggs could be the next supporting WR for Tom Brady and the Patriots offense. Diggs had 13 catches for 209 yards and a touchdown this year for the Vikings. The Chiefs led by the Patrick Mahomes are the biggest threat to the Patriots and they would need someone like Diggs to balance things. 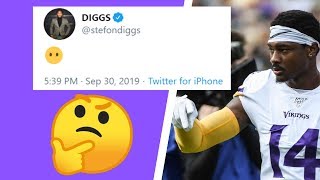