Miami Dolphins are rebuilding their team and trading out every big name on their roster to acquire future draft picks. The running back of the team, Kenyan Drake is the next name to be traded out in the 2019 NFL season. The Dolphins have already traded Laremy Tunsil, Kenny Stills, Kiko Alonso, and Minkah Fitzpatrick. Carolina Panthers, Tampa Bay Buccaneers, and Detroit Lions are the few teams which need Drake and can make a deal for him with the Dolphins team.

The Dolphins aren’t done. There is some interest in RB Kenyan Drake.

Chargers, Titans, Packers and 49ers have discussed with Miami

Carolina Panthers have no one in their roster as a backup running back and they rely too much on Christian McCaffrey. It would be nice to have an experienced RB like Kenyan Drake in the Panthers so they can give some rest to MacCaffrey and make sure he is not injured.

Reggie Bonnafon and Jordan Scarlett have never even touched the ball and it would be stupid to rely on them. Adding Drake in their roster would also give great support to their quarterback Cam Newton which they need right now.

Tampa Bay Buccaneers needs a reliable running back as both of their players for the job have disappointed the team. Peyton Barber and Ronald Jones have rushed for just 31 and 17 carries which are not enough to win. Kenyan Drake is pretty good compared to those two and could add to the offensive line of Bucs. The Dolphins are only interested in draft picks as they have already given up on the current NFL season.

Detroit Lions is not very stable in terms of their running backs and have changed a lot of names. C.J. Anderson was signed first but the Lions recently released him to sign Paul Perkins. Kerryon Johnson is the current opening running back but there is no depth apart from him in the team. Kenyan Drake would be a good addition given the Lions depends so much on their rushers which have been evident by handling the ball to RB of 60 times. 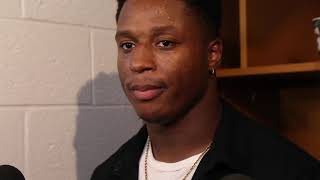