Miami Dolphins are currently the worst team in NFL right now where they couldn’t even score a single point against the Patriots. In the two games combined of NFL 2019 season, the Dolphins have been outscored by 102-10. There are certain rumors which says that the Dolphins are tanking this year to get rebuild their team for next year.

Most of the Dolphins players are not happy with the team and have requested a trade out with Minkah Fitzpatrick already linked to the Dallas Cowboys team. The reason is simple Dolphins knows that they can’t get to playoffs this year and hence they are eyeing for the NFL 2020 draft picks. As per the rules, the team with the lowest total get to pick the No. 1 pick in next draft and this is what the Dolphins intends.

Miami Dolphins to get the No. 1 Pick

The Dolphins are not only the lowest-scoring team in AFC East, but they will also soon get to the bottom of the whole league. Tua Tagovailoa from Alabama University is currently their main target for the NFL 2020 draft lottery. Tagovailoa is a great lefthanded quarterback who could easily get picked at an early stage in the first round in Las Vegas next year.

Stop complaining about your life. There are literally people who are Miami Dolphins fans.

Miami Dolphins: “Look how bad we are!”

Tua Tagovailoa: “Hm, might want to come back to Alabama.”

Trevor Lawrence: “Ha, sucks to be you two."

I will say this. I’d rather be in the Miami Dolphins shoes right now instead of the 0-2 Steelers, Bengals, Broncos, and Jaguars. The Fins have an identical record to these teams and have much greater draft and free agent options next season.

There are a lot of other talented wide receivers, running back and defensive ends waiting to be picked up for NFL 2020 draft. The only team worse than the Dolphins are Bengals and Jaguars, but given there are 14 more games left for this season, it could change soon. 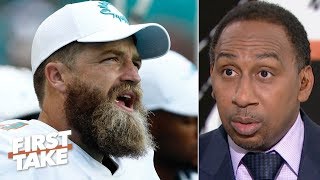