Dallas Cowboys and Miami Dolphins might soon engange in a trade deal for Taco Charlton and Minkah Fitzpatrick, or at least that’s what the latest NFL rumours around the block say.

Dallas Cowboys made back to back victories by defeating Washington Redskins in the Week 2 Sunday game. Dak Prescott and Ezekiel Elliot have made the Cowboys an amazing offensive side and they don’t need any problems in their defense. Taco Charlton is showing unnecessary attitude and not reporting to practice sessions.

It is why the Cowboys won’t think twice before removing out the defensive end. Charlton missed both the game against the Giants and the Redskins which means his exit from the team is confirmed. There are reports that Charlton has requested a trade out and the Cowboys can send him to Miami Dolphins in exchange for the safety Minkah Fitzpatrick.

The Cowboys are in talks with other teams for the first round pass rusher Taco Charlton and a deal will be made soon. There are rumors that the Cowboys were about to cut him during the preseason and as nothing such happened, the player himself has requested a trade out.

One situation to watch over the next few days: The #Cowboys have had recent trade talks surrounding first-round pass-rusher Taco Charlton, sources tell me and @SlaterNFL. While nothing is imminent, it could heat up this week. Charlton will be inactive today.

Dallas Cowboys have plenty of time to find suitable buyers as the trade deadline ends of October 29, 4 pm. Charlton was the 28th overall pick when the Cowboys signed him but he never showed any promise. Most of the times, Taco was injured and he has three sacks and a forced fumble. There are also several attitude problems with Charlton and the team and hence his trade deal was imminent.

Miami Dolphins is going through a tough phase where they lost both their starting games badly and the team players are about to leave the roster. One of them is Minkah Fitzpatrick who requested a trade out from the team. He is also looking at potential buyers and his name has been linked with the Cowboys.

A Taco Charlton for Minkah Fitzpatrick-based trade makes sense (DAL would need to add more obviously). MIA needs edge help bad and DAL should be aggressive in the safety market.

Jerry Jones, the owner of Dallas team himself has hinted that they are in talks with the Dolphins for a possible deal for Fitzpatrick. There could be an exchange deal for Taco Charlton and Fitzpatrick as both of them are first-round picks. Miami is under major rebuild and can use Charlton in their poor defense as a start. 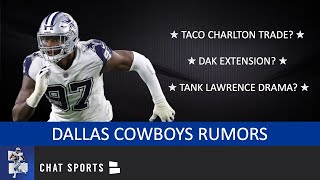