Jacksonville Jaguars lost both their opening games in the NFL 2019 season and players are not happy with it. The team is going nowhere and can’t take any solid decisions and the roster is breaking down. One of them is the cornerback Jalen Ramsey who has requested for a trade out to the Jaguars team.

In Week 2, the Jags lost a game to the Houston Texans which they were supposed to win. Ramsey was so upset after the game that he even walked out after the game. Oakland Raiders is one team which have a mutual interest in Ramsey and the deal can be made soon.

Ramsey has asked for Trade Out

As per the latest reports, Ramsey asked his agent on Monday to formally request a trade out of the team. The primary reason being Ramsey not happy with Marrone didn’t challenge a play during their loss to Houston Texans. Ramsey is a huge name in the Jaguars and there is no way they will send him out so easily.

The SF 49ers are working on a trade with Jacksonville for CB Jalen Ramsey. Jags seeking atleast 1 first round pick and a 2nd round pick. Deal expected to get done.

Jacksonville Jaguars have traded Jalen Ramsey to the ⁦@Patriots⁩ for a 2025 7th round pick #LetsGoBill pic.twitter.com/WLCka0ZWih

Most of the NFL experts are saying that the Jags will ask for at least one future pick along with some other assets from any team that wants to sign Ramsey. The price is too high but there are many teams such as Chargers, Patriots, Raiders, Cowboys and 49ers among discussions.

It is not the first time when Ramsey has asked for a move out of Jacksonville Jaguars as he has previously hinted the same in a podcast. When asked about where he would like to play next, Ramsey said Nashville and Las Vegas. For those of you don’t know, Tennessee Titans are the team that represents Nashville and the Oakland Raiders comes under Las Vegas city.

Jalen Ramsey is a player you can build your entire defense around. He is that good. Saying you wouldn’t give up a first for that type of talent that wants to be a Raider is simply silly. No high draft pick is a given. Ramsey is. Fucking send that shit @MikeMayock #RaiderNation

The more prominent name in the two is the Raiders as they seriously lack some firepower after Antonio Brown moved out of the team. Jalen Ramsey going to the Raiders will be a perfect deal and everyone will get their worth. 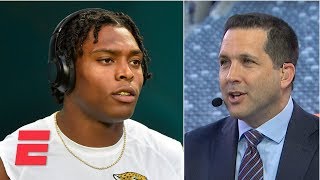