Taco Charlton has requested a trade out from the Dallas Cowboys and they are looking for potential teams to make a deal. The Cowboys led by Dak Prescott and Ezekiel Elliot won their second NFL 2019 season game against the Redskins but Charlton was not part of the team.

One situation to watch over the next few days: The #Cowboys have had recent trade talks surrounding first-round pass-rusher Taco Charlton, sources tell me and @SlaterNFL. While nothing is imminent, it could heat up this week. Charlton will be inactive today.

Rumours are one unnamed team are heavily pursuing Charlton #CowboysNation

The 2017 first-round pick plays as a defensive end and has been missing even the practice sessions with the Dallas team. Even though Taco has been injured most of the times and had average numbers, a change of pace and a fresh new roster could change things. The Cowboys are in talks with the Dolphins, Texans, Rams, and Jets to make a trade deal for Charlton.

Miami Dolphins are the top name in the list which would make a trade deal with the Cowboys. There are reports of the Cowboys trying to sign Minkah Fitzpatrick and they could give out Taco Charlton in exchange. The Dolphins are rebuilding their roster and given the first two games, their defensive side is a joke. Charlton could be the fresh start that the Dolphins need for the next NFL season.

A Taco Charlton for Minkah Fitzpatrick-based trade makes sense (DAL would need to add more obviously). MIA needs edge help bad and DAL should be aggressive in the safety market.

Houston Texans moved out Jadeveon Clowney and it was the stupidest thing they could do. Without him, they couldn’t do any pass rushing and lost the first week game against the Saints. Even the Week 2 game against the Jaguars, the Texans barely managed a win at 13-12. Taco Charlton could help their defensive side and they should not waste any time in trading him.

Los Angeles Rams despite winning their first two games in the current NFL season have a lackluster defense. Aaron Donald could use some help in the defensive side and Charlton would be a perfect fit in the team. The Rams are a Super Bowl contender and they can’t risk Todd Gurly and Jared Goff getting injured, It would be wise of them to have another strong name guard their offense for the rest of the 2019 season.

New York Jets lost the Week 1 game even after leading the first half with 16-0 against the Buffalo Bills. The problem is simple, the team depends on the offensive side too much and can’t stop the opponents from scoring. Jordan Jenkins needs defensive support for the 3-4 play and Charlton could live up to that. Even though Charlton has not shown anything impressive, one should not forget he was a first-round pick and hence there is talent in him. 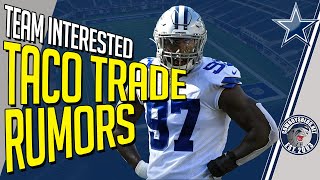