Cleveland Browns had high hopes before the start of NFL 2019 season but it faded away as they are 2-3 after five games. The biggest reason for the failure of Browns is considered to be their weak offense and the blame game has already started. As per the rumors, the star wide receiver Odell Beckham Jr. and head coach Freddie Kitchens could be soon out of the team.

Browns’ WR Odell Beckham Jr. has played on Monday Night Football nine times; in those nine games, he has 57 catches for 916 receiving yards and eight touchdowns.

The Browns lost to the San Francisco 49ers by 3-31 and it has made the team management go crazy. The Eagles, Patriots and 49ers are interested in Beckham Jr. and there are high chances of a deal before the October 29 trade deadline. New England Patriots is missing out on Antonio Brown and could very soon sign Odell Beckham Jr. as the replacement.

The Browns are very inconsistent in the 2019 NFL season as they scored 40 points against the Ravens and won the game while they couldn’t make it more than 3 points in the last game. While everyone has started to blame Odell Beckham Jr. for his poor performance, one must not forget that Baker Mayfield is equally responsible.

If Lamar Jackson posted these stats with Odell Beckham Jr. and Jarvis Landry he would be killed by the media. But this “wasn’t Baker’s fault” pic.twitter.com/1LrBmJoCyT

In fact, Mayfield is the one who has been the weaker link, repeatedly getting intercepted and running for his life even to make a single touchdown. Beckham Jr. only had just 23 catches for 335 yards with one touchdown and their offensive line is their biggest weakness.

The New England Patriots are actively looking at the wide receiver market in the NFL trade deadline as they are not the same after releasing Antonio Brown. Most of the Patriots players are getting injured and Tom Brady himself is on the risk of relying on the rookie receivers.

Patriots have inquired about the availability of Odell Beckham Jr., per source. pic.twitter.com/7T8RAwP2rV

Odell Beckham Jr. is a WR who can change the game at any moment and the Patriots would absolutely need him in the NFL playoffs. The Browns wasted no time to sign Odell when the New York Giants put him on the trade block, the same will be the case with Patriots. 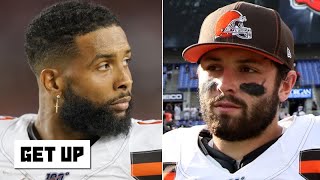