Cleveland Browns and Washington Redskins might soon engage in a trade deal involving Trent Williams in order to protect Baker Mayfield, or at least that’s what the latest rumour around the block seems to suggest.

Cleveland Browns lost another game in NFL Week 5 at the hands of San Francisco 49ers badly at 31-3 and are currently at 2-3 for the 2019 season. Everyone had huge expectations from Baker Mayfield after his breakout rookie year but he kind of disappointed the fans.

Trent Williams after the game with the Patriots plane pic.twitter.com/kQvA4Prr0J

The opening quarterback for Browns only completed 8 out of his 22 passes and was intercepted twice. What makes it worse is that Mayfield who was the No. 1 overall pick in 2018 NFL draft got sacked 4 times at the hands of 49ers rookie defensive end Nick Bosa. The offensive tackles of Cleveland are unable to protect Baker and the team could sign Trent Williams from Redskins very soon for the job.

Baker Mayfield is still trying to do his job and rushed for 342 yards with a touchdown against the Baltimore Ravens. The real trouble is the offensive line of Browns which has failed badly in protecting their starter quarterback. Chris Hubbard and Greg Robinson were useless against the defensive players of 49ers and Mayfield were left on his own for the most part.

Not only the Browns are losing games due to their poor offensive support, but Baker Mayfield was also seen “running for his life” against the San Francisco 49ers. The Browns needs Trent Williams who could protect Mayfield, help him score and also avoid any major injuries to him.

Cleveland Browns and Washington Redskins are the ideal trade partners and an exchange trade deal for Trent Williams could be made soon. The Redskins are already a lost cause, are 0-5 in the 2019 NFL season and have also fired their coach Jay Gruden for the poor team performance.

I know many people have said something like this, but I would be absolutely SHOCKED if Trent Williams is not a Cleveland Brown by next week.

Williams has already made it clear that he will not go back to Washington to play and even the team is looking for a major roster rebuild. The Browns could offer cornerback Denzel Ward and two future draft picks in exchange for Williams to the Redskins team. 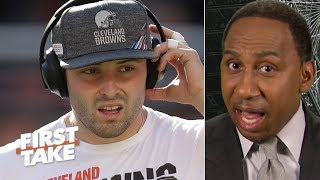