Antonio Brown is currently facing a civil lawsuit and everyone thought the star wide receiver will be worried like hell over it. However, it is not true as Brown was aware of the whole thing months ago and never made it public, Britney Taylor, a gymnast and former trainer of Antonio Brown who accused him of rape filed the lawsuit in the start of this year.

The Patriots management made a statement that they were not aware of anything related to the lawsuit until it came to public knowledge. The whole thing can destroy Brown’s career as the Patriots are getting hate from the fans over the trade deal and the rape charges. The lawsuit was under settlement period and Brown hid the fact from New England Patriots, which could have led to team owner firing him.

Jeff Darlington, the popular sports reporter claims that the civil lawsuit for sexual assault was filed by Taylor in April, 2019. Antonio Brown had a deadline until last Sunday, September 8, 10 pm to sign a monetary settlement agreement. If Brown had paid $2 million to his accuser, the lawsuit would have been ended.

Antonio Brown entered into settlement discussions in April, which included mediation in May, culminating in a deadline last Sunday night to sign a monetary agreement that would end the sexual assault claims against him. He chose not to sign it.

But the star refused to do so and hence two days after that, Taylor’s lawyer filed the lawsuit on Tuesday, September 10. Even though the case is now looking more like a money grab, it doesn’t mean Brown should have kept it a secret from the Patriots.

Brown lied to get the Patriots Deal

New England Patriots and NFL had no knowledge about the lawsuit and only took action after the whole thing blew out on social media. There were rumors about the Patriots putting Brown on commissioner’s exempt list but they avoided it as they needed him in the Sunday game against the Dolphins.

Antonio Brown was credibly accused of rape LAST WEEK and is catching touchdown passes today. Was suspending him until the issue was resolved/investigated not an option?

Everyone is sick of Antonio Brown coverage, including the Miami Dolphins

According to NFL experts, if the Patriots owner Robert Kraft had known about the lawsuit in advance, Brown would have never been signed in the team. As of right now, the investigation is going on and NFL committees will meet with Brown and Taylor. There are high chances that the Patriots would fire Brown in case he is found guilty in any of the charges. 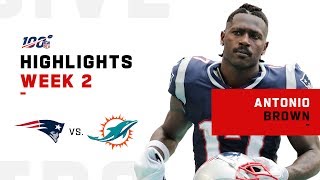