Golden State Warriors can’t seem to get out of trouble after they lost the 2019 NBA finals to the Raptors. One after the other, NBA stars are leaving the Warriors team and the remaining are getting injured. Willie Cauley-Stein and his replacement Kevon Looney are both down with an injury, along with the rookie Alen Smailagic.

Lakers lead the Warriors 59-51 at the break on TNT. pic.twitter.com/JgSAcjLKUV

Warriors vs Lakers preseason game went badly for the Dubs side as the duo of Anthony Davis and LeBron James thrashed them at 101-123. Stephen Curry, D’Angelo Russell, and other players couldn’t do much and it is time for them to improve their roster. The Warriors could explore trade options for Alfonzo McKinnie and Marquese Chriss before the NBA training camp deadline.

Alfonzo McKinnie is Important to the Warriors

Alfonzo McKinnie signed a two year non-guaranteed deal with the Warriors during the last training camp and it would not be wise to remove him from the team. McKinnie did his best in the Warriors vs Lakers game and scored 7 points, 6 rebounds and 2 assists while playing for 21 minutes.

Starting to really feel like Alfonzo McKinnie is playing for his job. The Warriors could use another center. Plus, Marquese Chriss is intriguing. And McKinnie's contract is non-guaranteed until Jan. 10. Only logical player other than the two-way guys for Golden State to cut.

After losing out Kevin Durant to the Nets and Klay Thompson to the ACL injury, Alfonzo is their best bet at the small forward position. He is the only one with experience, who played for the Warriors in NBA 2018-19 season and contributed his part in the big games.

The Warriors only have $407,258 left in their cap space for the entire year and it is very difficult to sign new players. There are still some ways through which the Dubs nation could sign Marquese Chriss without spending above their cap limit. Chriss could be offered the same non-guaranteed contract as McKinnie or even replace him for the same.

Let's hope being around Steph Curry will help Marquese Chriss finally get it together. #Warriors #DubNation #NBA #NBATwitter pic.twitter.com/qZJbt1DzPA

The two-way contracts are surely risky as there is no way to predict how a player will turn out in the future. One thing is sure that the Golden State Warriors need to make some changes and improve their roster for the NBA 2019-20 season by any means possible. 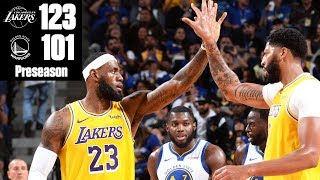