Los Angeles Lakers and Golden State Warriors will face each other in the next month of October. While their last encounter ended badly for the Lakers, things are now totally changed. LeBron James was the only one that gave the Warriors a tough fight but still lost 1-4 due to other players not performing. But the Lakers have totally revamped things with adding Anthony Davis and almost changing half of their team.

The Dubs are no longer the king of west side with Kevin Durant and DeAndre Jordan leaving to join the Brooklyn Nets. Stephen Curry and Klay Thompson are the only big names with the addition of D’Angelo Russell. Lakers vs. Warriors will go a lot interesting and James, Davis, Curry, Russell, and Thompson will be the ones to decide the fate of the match m

LeBron James and Anthony Davis have no Support

The Warriors might be one of the strongest NBA teams but LeBron James can break any defense. He has now one of the most athletic partners in the form of Anthony Davis and the duo is ready for taking revenge. Davis had an average of 25.9 points, 12.0 rebounds and 2.4 blocks per game in the last season with Pelicans.

Nike will name a new building after LeBron James. It will house a Sport Research Lab, a full NBA-size basketball court & 200-meter endurance track + a 15.63% incline outside ramp that extends more than 500 feet and offers athletes hill training. pic.twitter.com/xBi2goBLMa

Anthony Davis took a game (almost two) from maybe the best team ever in terms of talent in the 2018 Golden State Warriors with his starting pg being Rondo and the third-best player being Nikola Mirotic or Etwaun Moore. The conversation is going to change around him this season.

Dwight Howard, Rojan Rando, and Jared Dudley are also in the Lakers to support the power duo and prove their dominance by beating the Warriors. James and Davis will finally get a chance to prove what’s the hype about in Lakers vs. Warriors game.

While everyone thinks that the Warriors are broken with most of their players leaving, it is not true at all. Stephen Curry and Klay Thompson are the core players which took the Warriors in the last five NBA finals and winning three out of them. D’Angelo Russell is one of the best growing players with an amazing average and can prove more fatal than Durant.

S/o to @StephenCurry30 for pulling up to the UPB run last night 🐐 @PaTTTurn pic.twitter.com/sH2xaMRbeV

Draymond Green, Alec Burks, Kevon Looney, and Willie Cauley Stein are also there to provide depth in the backcourt. The Dubs team are one of the most consistent sides in the NBA and can prove everyone it doesn’t depend on a few star players. Lakers vs. Warriors is more of a game to prove which team has been affected a lot after free agency and the fans will get to see some of the best shots in basketball. 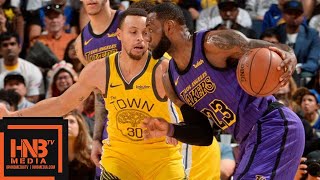