Al Horford in the Philadelphia 76ers is not doing that well given how they offered a four-year, $109 million contract in the 2019 NBA free agency. Joel Embiid, Ben Simmons, and Tobias Harris are doing great in the NBA Eastern Conference and the 76ers have the chance to win the championship title but Horford doesn’t fit in the Sixers team.

Al Horford and Tobias Harris. $289 million for a duo that can't carry the load whenever the two stars on the Sixers were not playing. The Sixers are currently 6th. pic.twitter.com/0EM90j1BUB

There are rumors that Philadelphia is looking to trade the veteran in the upcoming free agency and Brooklyn Nets have expressed some interest. The Nets are looking to pair up Al Horford with Kevin Durant and Kyrie Irving and make their own team winning trio. Philadelphia 76ers won’t give out Al Horford for cheap and the Nets might have to give Caris LeVert And Jarrett in exchange to make the trade deal possible.

Al Horford and Kyrie Irving have played together for several years in Boston Celtics and they share a great bond on and off the court. Kevin Durant is yet to play for Brooklyn Nets but he and Kyrie Irving are already one of the greatest duos without a single game.

Kevin Durant, Kyrie Irving, and Al Horford can form the “Big Three” for Brooklyn Nets and without any sharp competition in the East, the trio can easily content for NBA 2021-22 championship title. In the current NBA Season, Horford is having an average of 12.0 points, 6.9 rebounds, and 4.1 assists, while shooting 44.2 percent from the field and 33.7 percent from beyond the arc.

Al Horford won’t be traded out by the Philadelphia 76ers for cheap as they have invested a huge sum on the veteran star. It also raises the question of whether the Brooklyn Nets will be willing to give up Jarrett Allen and Caris LeVert in exchange for Horford. Allen and LeVert are doing great in Brooklyn and to trade them will be a huge risk.

There are some other targets for Brooklyn Nets which include Bradley Beal from Washington Wizards, CJ McCollum from Portland Trail Blazers, Kevin Love from Cleveland Cavaliers, and Buddy Hield from Sacramento Kings. The Nets will try to go big in the 2020 Summer free agency and trade for one of the NBA superstars for sure. 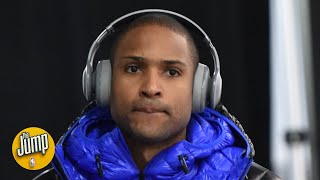