Chris Paul trade rumors have been flying high since the NBA 2019-20 season started and the All-Star point guard won’t stay too long with Oklahoma City Thunder. Russel Westbrook moving to Houston Rockets was the main reason why Paul ended up on OKC in the first place. The Thunder always planned to use Chris Paul as a trade asset and with the 2020 February trade deadline nearing up, it is perfect to make a new deal.

Who wants to see Chris Paul remain with our team? 🙋‍♂️#ThunderUp #Thunder pic.twitter.com/VtNClMei95

Philadelphia 76ers is one of the teams that could take an interest in the veteran guard and sign a new trade deal with him. The Sixers could offer Al Horford as the main trade chip to Oklahoma City club for signing Chris Paul during the NBA trade deadline.

Chris Paul even at the age of 34 is playing amazing with an average of 17.0 points, 5.0 rebounds, 6.4 assists, and 1.6 steals while shooting 48.1 percent from the field and 37.2 percent from beyond the arc. He could easily play as a point guard next to Ben Simmons and Joel Embiid for Philadelphia 76ers and prove to be a trusted scoring option.

…in the first half
…against his former team, the Rockets.

The Sixers are currently 6th seed in NBA East with 29-17 record which is not that great given the level competition. Chris Paul with his immense experience could be a great addition to the 76ers who could clear their playoffs hurdles.

Oklahoma City Thunder is doing good in the NBA Western Conference and are at 7th seed with 26-19 record. But let us be honest here, the group that has Lakers, Clippers, Rockets, Nuggets and Mavericks won’t let the Thunder side do much in the playoffs. Sam Presti, the Thunder GM is a realist and he knows that Chris Paul is not their future.

OKC needs future draft picks and assets which could help them down the line and Paul is already a burden on their salary. The 76ers could send out Al Horford along with other assets which would help Oklahoma City Thunder clear up their cap space. 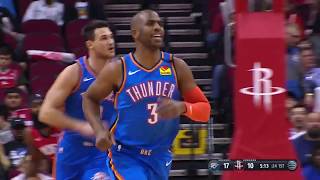