LeBron went on to the Lakers, while Irving moved to Boston Celtics and then to the Brooklyn Nets as a free agent. Now it looks like more players from the Cleveland team will be traded out. Here are the trade rumors about Kevin Love and Tristan Thompson and which NBA team they can go next.

Cleveland Cavaliers was once a champion team with making four times in a row to the finals. The first two finals were won the Cavs team against the Golden State Warriors in 2015 and 2016. The main reason behind the victory were players such as LeBron James and Kyrie Irving. But with time, the rookies became the star players and left the Cavaliers team.

During the last season, Kevin Love signed a four year deal with the Cleveland Cavaliers for $120 million. The free agency analysts are saying that Love will be traded out to other teams so that the Cavaliers can make a comeback. The real reason behind throwing out Love is that he has spent most of his time in an injured state.

July 2, 1986. Happy Birthday to my big brother Collin @g3ni3. From the early days of me telling you “I will play in the NBA one day” you have supported me. This picture gives the smallest idea of just how much we grew up loving the game. Enjoy the day and thanks for letting me wear Jerry West’s jersey instead of Dad’s!! 😂😂

Kevin Love only managed to play 22 games in the last season of NBA. Hence the Cavaliers feels that he is extra baggage and they can get some better players instead. But what the Cavs are forgetting that if healthy, Kevin is an amazing player who can shoot doubles from the other side of the court.

Tristan Thompson’s Contract is Over

Another player which the Cleveland Cavaliers is none other than the ex-boyfriend of Khloe Kardashian, Tristan Thompson. There was not any over the top performance from Thompson, hence he will be traded out. As of right now, Thompson has only one year left in his $82,000 contract.

Goodluck to all the draftees today on #DraftDay ! Whether you get drafted or not, stay motivated and keep working

It is expected that Tristan will become a free agent, and the Cleveland team will not re-sign him. There is a lot of pressure on Koby Altman, the general manager of Cleveland Cavaliers to rebuild a stronger team. More star players are needed to get the winning combination back for the Cavaliers squad. 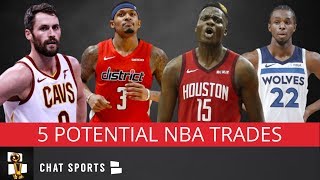