Chris Paul has been finally moved out of the Houston Rockets in one of the biggest exchange deals in NBA. As the reports were saying, the Oklahoma City Thunder finally moved Russel Westbrook out of their team. The Rockets wanted Westbrook and hence they offered Paul and two future picks and two swaps in exchange.

Even though it looks like the City Thunder got the better part of the deal, but the future is now what it looks like. Chris Paul has gotten old, is not performing good and was having issues with former teammate James Harden. The Rockets wanted to get rid of his heavy contract for $124 million and they somehow managed it. The trouble is now shifted in the Thunder team and having Paul for the next NBA seasons could be a nightmare for them.

Chris Paul is currently 34 years old and will be 37 when the new deal with the Oklahoma team ends. At that time, the Thunder might not find a suitable buyer and a good deal for Paul. He also missed 24 games in the last season of NBA, which makes it a third year to miss out more than 20 games.

If that is not worse, his performance has also degraded with 41.9 percent from the field and 35.8 percent of his three-point shooting. Paul has still 3 years left on his contract and when the NBA 2021-22 season arrives, the $44.2 player option will be useless of the Thunder. Also, with time and age, the performance of Chris Paul is further going to get worse.

Future of the City Thunder Team

The Oklahoma City Thunder has lost both of its main players in the form of Paul George and Russel Westbrook. The Clippers now have the power duo of George and Kawhi Leonard and are at the No. 1 spot in NBA power rankings. Westbrook in the Rockets with his former partner James Harden also makes them a strong contender.

Hey Thunder fans, at least you now have Chris Paul and 10,000 draft picks to help build around him. #PointGuardOfTheFuture

Chris Paul and the rest of the NBA All-Stars on the Thunder pic.twitter.com/Gn4PPFhiS0

On the other hand, the Thunder team is left with an older Chris Paul. It gets worse, as Paul had attitude issues with Harden, who is to say the same won’t happen again with his new Thunder teammates. Shai Gilgeous-Alexander, the player exchanged from Clippers have still a lot to learn. The future of Oklahoma City looks dull, unless they do something big with all the future picks in the next year. 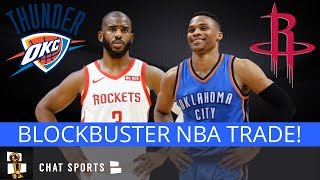