Phoenix Suns are struggling in the current NBA season after a good start and are at No. 13 ranking with a 14-23 record. The Suns are looking to end their playoffs drought and for that, they need more star power around their face of the franchise, Devin Booker. It is why the Suns are considering to trade out DeAndre Ayton in exchange for Karl-Anthony Towns from Minnesota Timberwolves.

Towns is reportedly not happy with the T-wolves and want to play for a better team, although Phoenix might not be at the top spot, they certainly have the talent for that. Karl-Anthony Towns and DeAndre Ayton exchange trade deal between the Suns and Timberwolves could easily happen before the deadline.

Karl-Anthony Towns has already proven that he is one of the best leading men in the current era of NBA and a lot of teams are already interesting in signing him. Towns is not just limited to scoring and can also rebound, facilitate, and protect the rim. The Suns can have a legitimate threat from beyond the arc, capable of playing at both center and the power forward position.

In the 2019-20 NBA season, Karl is playing amazing with an average of 26.5 points, 11.7 rebounds, 4.4 assists, 1.3 blocks, and one steal per game. The best part is that the big man is shooting 51.4 percent from the field and 41.8 percent three-pointers from beyond the arc. Devin Booker and Karl-Anthony Towns duo together can totally dominate the court and take the Suns to playoffs.

DeAndre Ayton was selected as the No.1 pick in 2018 NBA draft by Phoenix Suns which means he certainly has some solid talent. But even after posting good numbers, Ayton is somehow not able to convert that into victories for the Suns.

DeAndre Ayton is real good, but I am watching Devin Booker right now and still can’t believe the Suns could have paired him with Luka Doncic or Trae Young.

Ayton has a lot of potential and he needs more space where he can lead the team and Minnesota Timberwolves can easily provide it. The T-Wolves are already planning to rebuild and adding DeAndre Ayton would make perfect sense for them as Suns get Karl-Anthony Towns in exchange. 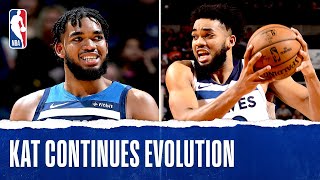