Giannis Antetokounmpo trade rumors are heating up despite the 2018-19 season MVP not being a free agent till Summer 2021. It is up to Giannis whether he opts to re-sign with the Milwaukee Bucks or find a new team with a new contract deal. Antetokounmpo’s agent, Alex Saratsis talked about his client’s future with the Bucks and whether or not he will stay with the Milwaukee club for the rest of his career.

At the moment, Giannis is showing amazing play with five back to back 30+ points game and the Bucks are the No. 1 spot in NBA 2019-20 season with 46-8 record. But Giannis Antetokonunmpo can enter the free agency and leave the Milwaukee Bucks behind if the team loses the next finals.

Giannis Antetokounmpo will be a Free Agent in Summer 2021

Giannis Antetokonunmpo is not thinking about the free agency or any kind of trade deals at the current moment. The Greek Freak is only focused to take the Milwaukee Bucks in the next NBA finals and win the trophy for his team. Giannis can stay with Milwaukee for his entire career, the city has given him immense love and he is kind of raised in there. He wants to win a championship for the Bucks right now, but in case his team fails to do so, he might re-think his contract once the 2021 Summer free agency gets closer.

Giannis Antetokonunmpo has been linked with a number of NBA teams and Golden State Warriors could be his next ideal destination. Ever since Kevin Durant has left the Dubs side, there has been kind of a power vacuum in the Bay City.

Giannis has expressed that if Durant recovers and makes the Brooklyn Nets a powerhouse with Kyrie Irving, he might join the Warriors. There have been numerous trade rumors after the statement that linked Giannis Antetokonunmpo with Warriors and it could happen in the next year’s free agency. 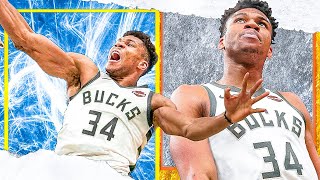