Carmelo Anthony is one of those names who despite being an NBA legend was not traded in the free agency. One can blame it on the Rockets for deciding so long or his own managers, but the fact is Melo is still available as a free agent. There would be plenty of teams ready to have Melo in their roster given his experience and immense talent. Anthony has been a 10-time All-Star player which is enough to prove his worth as a player.

In the meantime, some rumors were floating around which states that Melo won’t play NBA anymore and either retire from baseball or just play for the US national team. To suppress them, the NBA superstar himself came forward and shared his future deals. Melo is very confident in himself and has full faith that the Lakers or Clippers will offer him a deal very soon.

Melo on his Future Deals

Carmelo Anthony was directly asked questions about his future in the NBA and whether he is getting any offers. In response, Melo revealed that he has no plans to quit the NBA anytime soon and wants to play basketball as long as he is physically and mentally fit. Here is what Melo said on his future deals and which team are offering him a contract.

I’m loving this episode of #FirstTake. Carmelo Anthony is telling his side of the story and I believe him 100%. “It’s deeper than basketball.” No ifs, ands, or buts. He did everything the media claims he refuses to do. In fact, the media is to blame for all the stigma. 🤷🏾‍♂️

[blockquote footer=”Carmelo Anthony”]We are reaching out to several teams, we are in contact with them. I can’t share many details but there are conversations going on. As for the current moment, I want the public to know where I stand. Mentally, physically, emotionally, I want to play basketball and that’s what matters.[/blockquote]

Lakers or the Clippers?

Los Angeles Lakers have been strongly linked to Carmelo Anthony for a long time. The primary reason being LeBron James trying to make a deal happen so that he can play with his friend once again. It makes a lot of sense also as Melo and James would be a treat to watch on the basketball court, wearing the same jersey.

Kyle Kuzma working on his game with Carmelo Anthony 👀🔥 pic.twitter.com/rayyPWZSCV

Carmelo Anthony is right though. If you a have a problem with someone, don't say it behind people's backs, or after they roll; say it direct to them, in the moment & to their face. Anything else is super weak, calculated & immature. Great job on the interview @stephenasmith.

On the other hand, the Clippers have been also in touch with the NBA star for a future deal. Clippers team management knows that if Melo goes to the Lakers, they can lose their edge over their city rivals. Lakers need to make a deal soon, otherwise, the Clippers will offer Melo a contract and sign him. 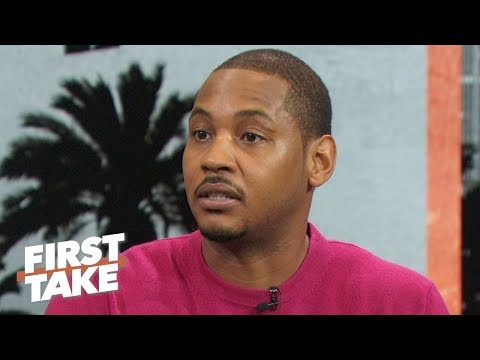