Andre Iguodala did a great job in the Warriors team and help then won 3 NBA championships in the last five years. Even he was named as the NBA finals MVP when the Warriors defeated the Cavaliers lead by LeBron James. Iguodala has been one of the best defender in NBA and teams are waiting to sign him for the next NBA season.

Things will be different without Steph Curry and Andre Iguodala together on the Warriors 😞 #warriors pic.twitter.com/Cv5exHyxlG

But the Dubs side had to send Iguodala to the Grizzlies to make space for D’Angelo Russell. The Memphis Grizzlies have decided to put Andre Iguodala on the trade market and he could soon sign a new deal with the Clippers, Lakers, Celtics or 76ers.

The Clippers already have a great roster with Kawhi Leonard and Paul George, adding Andre Iguodala will make it even better. Lakers vs Clippers have high chances to be the next NBA finals and having Iguodala will come in handy as he could stop LeBron James. Also, he would provide valuable contributions to the Clippers defense side and also get a chance to win another NBA title.

The Lakers have the best odds to win the NBA 2020 title as LeBron James and Anthony Davis even proved that by beating the Warriors in the preseason games with a big margin. Danny Green and Avery Green are quality defenders and adding Andre Iguodala will make them a powerful trio capable enough of stopping any NBA offense. Further, LeBron won’t have to worry about Iguodala as they play in the same team.

If Andre Iguodala gets bought out and signs with the Lakers imagine at closing line up of Bradley, Green. Iggy, LeBron, and AD. pic.twitter.com/d24hA85Ipm

The Celtics have strong chances of topping the weaker NBA Easter conference due to their strong offensive side. But they need someone in their defense as Kemba Walker and Enes Kanter are not good at that job. Andre Iguodala can solve the problem for the Celtics and also provide a veteran presence which the team needs very badly. The Celtics are looking for a star player and Iggy might be the perfect fit for them in the NBA 2019-20 season.

The Philadelphia 76ers are coming out one of the strongest teams in the relatively weaker NBA Eastern Conference. Andre Iguodala would love to play with the 76ers as he has an emotional history with them because he started his NBA career with them in 2004. Ben Simmons and Joel Embiid are looking good and Iguodala playing with them will certainly boost the 76ers fro the upcoming NBA season.

I have to admit, when I saw #Iggy trending, I thought the @sixers had made a move to bring Andre Iguodala back. 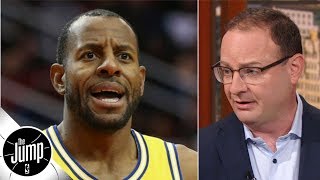