Miami Heat made the biggest trade deal for their team by signing Jimmy Butler in the 2019 free agency. Ever since the Butler deal, people are expecting the Miami team to get back to the 2012 glory days with LeBron James. While most of the fans don’t even consider the Miami Heat as the top contender in the NBA eastern conference.

There is no comparison between Butler and James, and team Miami knows it very well. Along with that Butler is known for his bad locker room habits and hence the team needs some veteran players to keep the situation calm. Since the Miami Heat doesn’t trust Butler, they may sign Chris Paul and Carmelo Anthony for the NBA 2019-20 season.

It is common knowledge that the Oklahoma City Thunder have no plans for Chris Paul and trade him out soon. Miami Heat tried to get Russel Westbrook, but he was traded to the Houston Rockets in exchange for Paul. Pat Riley, the manager of Heat team is not trying to sign Paul to give up a boost to their roster.

Chris Paul seems to be taking the big brother/veteran role in stride. pic.twitter.com/bCFdr5X1sA

Chris Paul, despite being 34 years old is one of the best point guards in the NBA and has a lot of game left. There is not much competition on the East side as the Raptors, Bucks and Sixers are not looking that strong. Further, Paul can help Jimmy Butler to stay focus and teach him some things from his vast NBA experience.

Carmelo Anthony is still one of the best offensive player and all the drama surrounding him won’t change his playing abilities. Despite being dumped by the Rockets and Thunder, Melo wants to play basketball for a few more years.

The day we see a “Carmelo Anthony has signed with the…” tweet pic.twitter.com/Ihv19eiM9H

Anthony has been working hard, practicing the games and keeping up with all the routine. Melo could form the strongest trio in NBA by joining Paul and Butler for the Miami Heat. The Big 3 for Miami team can make some great combo moves and make it to the top of NBA Eastern Conference. 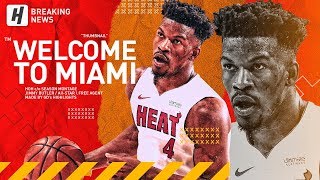