NBA 2K20 is giving out tribute to late Kobe Bryant in a unique way as they have updated the game to add KB patches on Lakers jersey, just like what the Los Angeles team did in real life. Every basketball fan is deeply affected by Kobe passing away in a helicopter crash and they are honoring the Lakers legends and giving out special tribute to remember him. Fans are also asking NBA 2K games to have Kobe Bryant in the legends cover of their upcoming NBA 2K21 game.

NBA 2k20 game developers updated the title to keep it fresh with the real-life design changes on LA Lakers uniform. There is a new upgrade which has added black color KB patches on the right side of Lakers team jersey. While fans of the NBA sports have already noticed the change when they saw LeBron James and other players from the Lakers team playing against Portland Trail Blazers recently.

The only change in real-life Lakers jersey and “NBA 2K20” jersey is that there is no KB black band patch on the backside. Ever since Kobe has passed away, NBA 2K20 players have been honoring him in different ways by dressing in Lakers uniform and going for a Parade and doing 24-second violation to honor his jersey numbers, after seeing the real NBA teams doing the same in 2019-20 season games.

Fans of NBA 2K game series have been asking to make Kobe Bryant as the Legend Edition cover athlete for the “NBA 2K21” title to honor the superstar. It won’t be the first time that Kobe will feature on the Legend Edition cover as it has already happened for NBA 2K17 after he retired from the sports in 2016. But that doesn’t mean the same can’t happen again, and NBA 2k21 will make sure to give a special tribute to the legend Kobe Bryant. 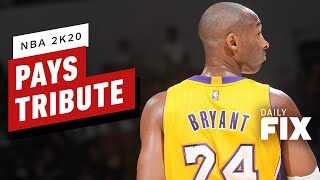