Tomura Shigaraki will be finally released in “My Hero Academia” Chapter 268 and Endeavor and Mirko will fight the monster together. Here is everything you need to know about My Hero Academia Chapter 268 release date, plot spoilers, predictions, theories, raw scans leaks and ways to read online the manga chapters.

My Hero Academia Chapter 268 spoilers show that Aizawa and Mic join the fight with Crust to tackle the enemies. Mirko is badly injured but still alive and manages to land a nice blow in the middle of the pod holding Tomura Shigaraki. Boku no Academia Chapter 268 raw scans pages reveal that Shigaraki smiles menacingly from inside the pod and his power is at 74 percent.

One of the female Nomus conjured up an AoE attack which goes in all directions. Endeavor and Mirko are pushed due to the attack and prepares to fight back. The pod holding Shigaraki starts cracking from the middle and My Hero Academia Chapter 268 will finally show the monster in action.

My Hero Academia, Ch. 267: Another battle-filled chapter as the heroes work to take down the villains for good! Read it FREE from the official source! https://t.co/8ZQotD59z4 pic.twitter.com/n3KLzuV5NE 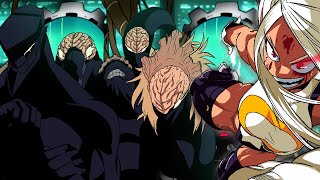