My Hero Academia Chapter 268 won’t end well for Hawks as Dabi has badly injured the Pro Hero. The previous chapter of Boku no Hero Academia manga series shows flashbacks about Hawks and how Dabi can hurt him really bad. In the past, Tokayami asks Hawks about his weakness and the hero replies it would be fire because he can’t do much if his wings are burned.

My Hero Academia 268 manga chapter will also reveal the true identity of Dabi as he doesn’t care about Shigaraki or the League and just want to follow Stain’s plan. Hawk’s fate will be revealed in “My Hero Academia” Chapter 268 after Dabi attacks him with flames and Tokayami rushes to the scene. Here is everything you need to know about My Hero Academia Chapter 268 release date, plot spoilers, predictions, theories, raw scans leaks and ways to read online the manga chapters.

My Hero Academia Chapter 268 spoilers are predicting that the conclusion of Mirko vs high-end Nomus will also be done soon. Mirko has been fighting the powerful Nomus all alone and she decided to go after the Scientist, Dr. Garaki directly. But the female hero is badly injured and bloodied and will have to face Tomura Shigaraki in My Hero Academia 268 manga chapter.

Mirko vs Shigaraki fight in Boku no Hero Academia Chapter 268 won’t be easy and someone has to arrive for help. Hawks could be badly injured from Dabi’s attacks and it might be too late for Tokoyami to save him MHA Chapter 268 theories suggests that Hawks might be laying on the ground with his wings burned when Tokoyami reaches the scene.

My Hero Academia Chapter 268 will release on Sunday, April 12, 2020, as per VIZ’s official website. The raw scans for My Hero Academia 268 manga chapter will be leaked out 2-3 days prior on the internet around April 10 but it would be better to wait for the official release and English translation.

My Hero Academia, Ch. 267: Another battle-filled chapter as the heroes work to take down the villains for good! Read it FREE from the official source! https://t.co/8ZQotD59z4 pic.twitter.com/n3KLzuV5NE 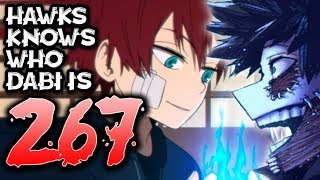