My Hero Academia Chapter 262 will show Mirko trying to capture Dr. Ujiko as she battles through all the high-end Nomus. The Heroes are busy fighting an entire horde of Nomus and can’t come to the female warrior’s rescue who will fight all the monsters alone even though she is badly injured.

My Hero Academia Chapter 262 story will continue after Mirko killing the Nomu Johnny by blasting the lab door on him. The Evil Doctor was a bit sad as he considered Johnny as his friends and said his goodbye after opening the glass doors to several other Nomus. The Heroes can’t come to rescue in time for My Hero Academia 262 manga chapter as they are fighting the Paranormal Liberation army, Mirko has to handle everything alone.

Dr. Ujiko might be able to escape as Mirko vs Tomura Shigaraki fight will get fatal. There is no way the doctor will get captured at this point and he will escape with his greatest creation, Tomura Shigaraki before the heroes arrive. Mirko is badly injured and might not able to fight properly in “My Hero Academia” Chapter 262 and Dr. Ujiko will run away from the Pro-Heroes.

My Hero Academia Chapter 262 will not be releasing on this Sunday as it is having one week hiatus. The latest My Hero Academia chapters will return on Sunday, March 2, 2020, as per VIZ’s official website. The raw scans for My Hero Academia 262 will be leaked out 2-3 days prior on the internet around February 29 and it would be better to wait for the official release.

My Hero Academia, Ch. 260: Emotions run high as the heroes close in on their prey! Read it FREE from the official source! https://t.co/Rd0kOVeq7V pic.twitter.com/9VNNDG1JCo 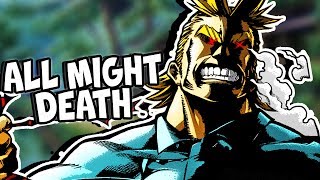