Money Heist Season 5 will answer all the unsolved mysteries and reveals the fate of Professor. The fourth season of La Casa De Papel kind of ended in between without any conclusion or proper ending. The gang of thieves is still stuck in the Bank of Spain whereas Alicia Sierra has found the Professor’s secret hideout.

It seems that our favorite thieves are in trouble but the Professor always have a new trick in his sleeve. Here are some of the most plausible theories that could actually happen in Money Heist Season 5 and move the story forward towards a conclusive end.

Money Heist Season 4 had so many twists and turns and for the first half, everyone thought that the thieves will get caught. Nairobi was somehow saved only to be killed by Gandia later. Rio and Tokyo have reunited but things are not looking good for anyone. The biggest shocker came when the Professor replaced the army helicopter by one of his own and rescued Lisbon from the authorities.

It will play an important part in La Casa De Papel Season 5 as Lisbon knows about Alicia and could be proved useful. Fans can see that things are not looking good for the gang, but the Professor can turn Alicia to their side as she has already lost her job and is wanted by the authorities. Money Heist Season 5 plot theories also say that Alicia is actually Berlin’s wife Tatiana or closely related to her.

How will the Gang Escape from Bank of Spain?

The Professor was kind of shocked when Alicia found him and despite so much planning, he can’t anticipate everything. But what makes him different is that El Professor always improvizes and make new plans on the go to tackle the situation. Fans are hoping that something similar will happen in Money Heist Season 5 and the Professor will either incapacitate Alicia or convince her to join them.

Meanwhile, the gang is still stuck in the Bank of Spain melting gold, there has to be way so that the thieves can escape. The recent Coronavirus pandemic might have affected the filming and Netflix will release Money Heist Season 5 in late 2021 as per the reports. 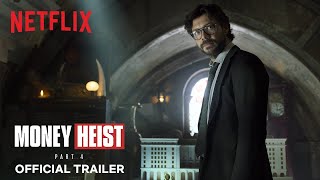