Microsoft Surface Duo was one of the two new products announced by the tech giant last year that shocked everyone in the industry. The Windows OS maker launched two dual-display devices at the Surface Event presentation in 2019. Surface Neo was the bigger one that ran on Windows 10X (new OS for dual-screen devices) and Surface Duo which surprisingly run on Android instead of Windows.

Fans are very much excited for the first Microsoft device that runs on Android and offers a dual display. There is a new video leaked about the Surface Duo which reveals that it will have a notification peek feature, where users can manage it without fully opening the device.

Surface Duo has been made to run on Android OS as it is more flexible than Windows and even Apple iOS system. There are a lot of tweaks and updates available in the dual-touchscreen handset. Microsoft is yet to announce anything officially about the features of Surface Duo but a video has been leaked on Twitter which shows an interesting way to manage notifications.

The short video clip shows that Microsoft has found a way to make Surface Duo efficient without an additional secondary display like Samsung Galaxy Z Flip, Samsung Galaxy Fold, Motorola Razr, and Royole FlexPai. Peek feature is the name of the method which allows user to partially lift one side of the and manage notifications which are condensed in bottom side and then scroll through them like a regular Android feature.

Microsoft Surface Duo release date has been mentioned as Holiday 2020 on their official website which means it will come out somewhere around December this year. As for the price of the dual-screen Windows Android smartphone, the company has not disclosed anything, but users can expect that it won’t come cheap. Surface Duo can easily cost above $1,500 if we compare it with the Galaxy Fold or other similar devices. 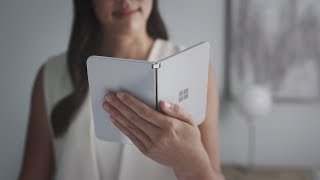