Meghan Markle could easily earn millions of dollars at this point if she divorces Prince Harry after they both have separated from the Royal family status. The Duke and Duchess of Sussex have stepped back as the members of the Royal family and it will increase their income. As per the reports, Meghan and Harry can easily take up brand endorsements now as they are not obliged by the royal laws.

Simon Huck who is best friends with the likes of Kim Kardashian and other media personalities has revealed that Meghan Markle could earn over $100 million through deals and endorsements, and that amount will further increase if she divorces Prince Harry and gets separated from her husband.

Meghan Markle could Earn over $100 Million after Divorce

Meghan Markle has been getting multiple brand endorsement deals ever since she and Prince Harry has left the Royal Palace. She can do commercials, endorse perfumes and can even get Netflix specials shows. Also, Meghan Markle could cash on her divorce with Prince Harry and earn over $100 million from that alone.

Meghan Markle is about to milk her new found freedom.

I won't knock the hustle.

Ace girls said a title and a royal allowance is joke money to what monetizing her married can fetch.

Prince and Meghan have left the UK palace and are now living in Canada, but everyone believes that it won’t continue for long. The Ex-Royal couple will either fly back to the United Kingdom or they go their separate ways and divorce each other. There are various job opportunities for Markle available in the United States, so she may never return with Harry and they will get a divorce soon.

Meghan Markle is never returning to England as she hates the place and feels the environment is toxic for her baby. The Duchess of Sussex has prepared for her divorce with the Duke ever since the first day of their marriage. It could also be the main reason why Prince William and Meghan were allegedly removed from their Royal status, so their divorce won’t complicate things and Meghan can’t ask share from the royal property.

#MeghanMarkle it has always been about dollars and fame to her.
even in the royal family she will always be way down the list.
divorce will be about 2 years away. once she establishes her mega income

Meghan Markle is now working to be independent and find sources of income before she divorces Price Harry to live a new life on her own terms. There are a lot of rumors about Harry and Meghan having a divorce coming up lately and it feels like something will happen soon. 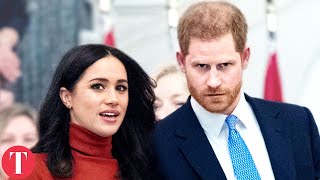