Lucifer Season 5 will premiere on Netflix soon and fans are eagerly waiting for the devil to return on earth. The show has become massively popular after it was saved from cancelation by Netflix and the stars are shipped by major fandom. Fans are calling Chloe Decker and Lucifer Morningstar as the Deckerstar couple. There are rumors that Lucifer and Chloe will have a steamy hot sex scene in the fifth season of Lucifer, as per the episode titles and leaked set pictures.

Lauren German, the actress playing the role of Chole herself has leaked new details on the Deckerstar sex scene that will happen in Lucifer Season 5. It is also possible that Netflix delays the entire Lucifer Season 5 or release half of the episodes early as the Coronavirus pandemic has shut down the filming and production.

Lucifer Season 5 will have Chloe and Lucifer Sex Scene

Lucifer star Lauren German who plays the role of Detective Chole Decker took to Twitter for entertaining fans during the Coronavirus lockdown. She talked about her real height, love for painting, classical music and how she’s passing time in quarantine. German also kind of teased that there will be some steamy moments in bed for Lucifer Season 5 without mentioning any names.

But fans are hoping that the sex scene will take place between Lucifer Morningstar (Tom Ellis) and Chloe Decker. Fans were quick to mention that Deckerstar sex is confirmed for Lucifer Season 5 story and it will be revealed soon.

Lucifer Season 5 has almost finished the filming but the last and final Episode 16 is not complete yet. Netflix have closed all their running projects due to the COVID-19 pandemic and it might lead to delay in release date for several TV series.

The premiere date for Lucifer Season 5 is not revealed by Netflix yet but it could get effected due to the coronavirus lockdown. Fans are hoping that Netflix releases the first 8 Episodes of Lucifer Season 5 earlier or else they will have to postpone the entire season. 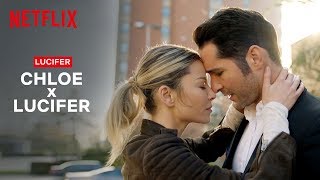